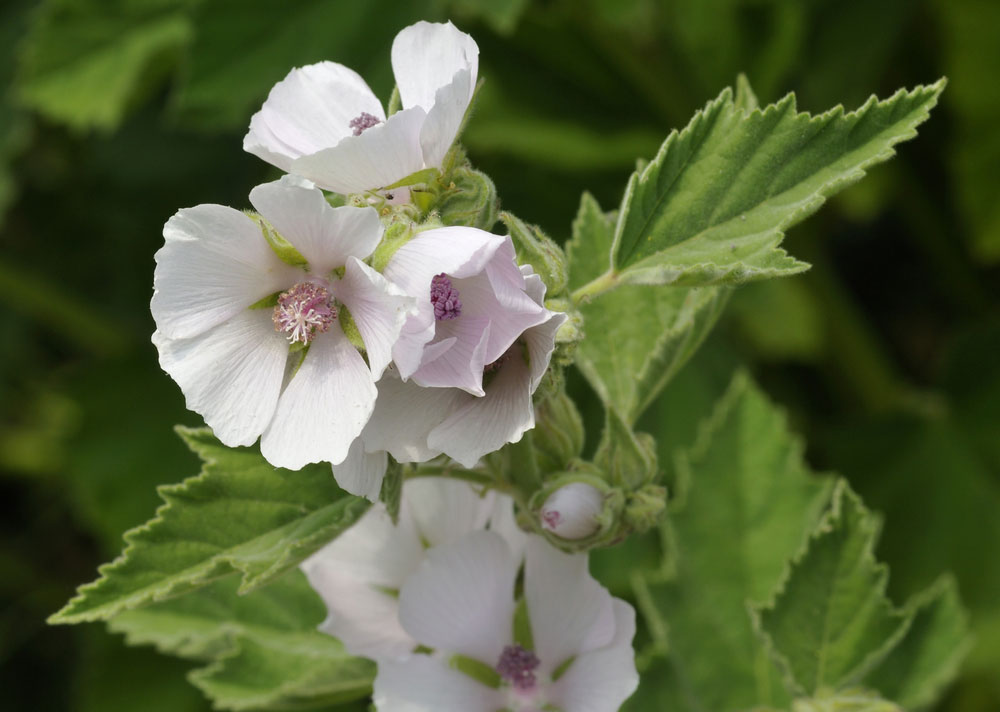 Wild edible and medicinal, the mallow plant, after which the marshmallow treat was named, comes from a large family of mallows. Called Malvaceae, the Mallow family includes okra, cottons and hibiscus, and you can certainly see the resemblance in the mallow flowers.

Every part of the marsh mallow plant, Althea officinalis, is edible and medicinal.

Like okra, marsh and rose mallow plants are known for their mucilaginous properties. The mallow plant’s root, leaves and flowers, all contain mucilage, with the highest percentage (11%) available in the late fall and winter.1)https://www.sigmaaldrich.com/life-science/nutrition-research/learning-center/plant-profiler/althaea-officinalis.html

Marsh mallow plant… a prodigal weed that serves from root to seed!

The Marsh Mallow Plant – The latin word for marsh mallow, tells us what it’s about: Althea officinalis, is named after the Greek Althea, meaning to heal or cure. 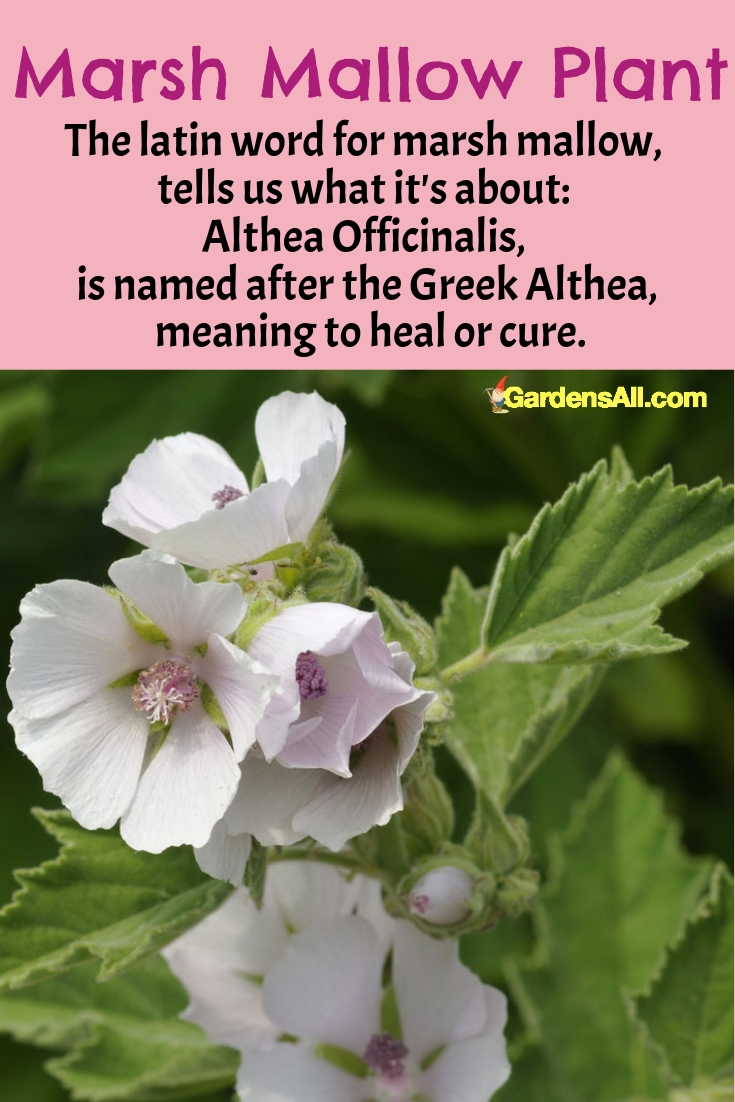 From Medicinal Mallow to S’mores

Roasted marshmallow and s’mores are virtually as synonymous with summer as cookouts and swimming pools… hot dogs and baseball. When it comes to winter treats, few things add that crowning touch to a cup of hot chocolate like marshmallows floating on top. 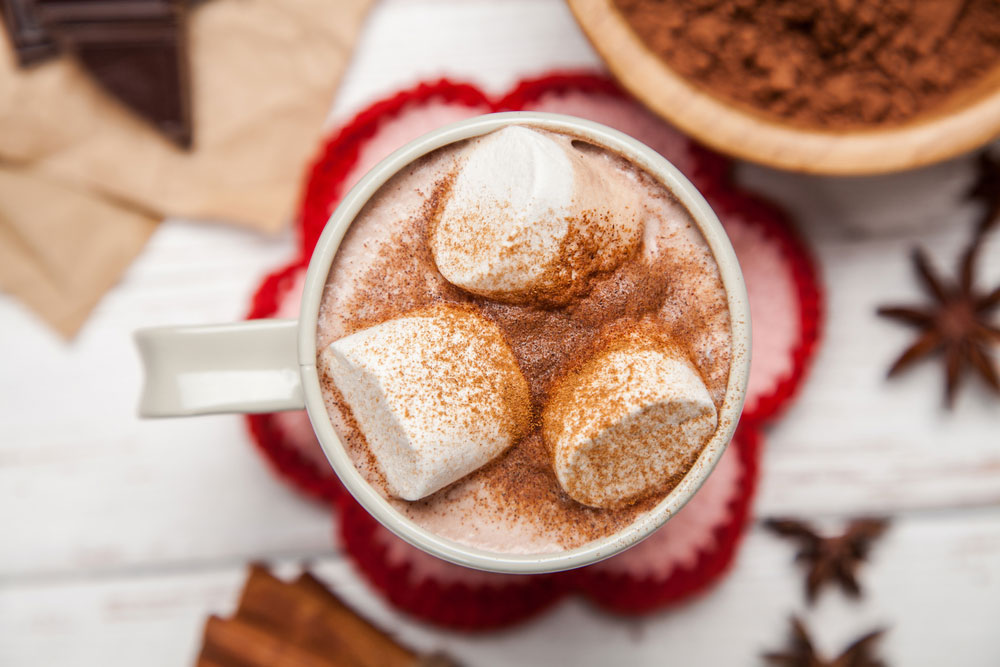 Yet far from this sugary fare, marshmallows originated from medicinal use of the sap of the marsh mallow plant in the treatment of coughs, colds and sore throats. Of course the puffy white treats of today no longer contain any of the ingredients of their namesake.

So, how did we get from an edible, medicinal plant to a squishy, sugary marshmallows with not a hint of real mallow—or anything else medicinal—in it?

Marshmallows originated from medicinal use of the sap of the mucilaginous root of the marsh mallow plant in the treatment of coughs, colds and sore throats.

We are finding differing information as to the exact numbers in the Malvaceae family, so including here two sources. If you know of more reliably exact information, please advise!

The Malvaceae, or the mallows, are a family of flowering plants estimated to contain 243 genera with 4225+ species. Well-known members of this family include okra, cotton, and cacao. The largest genera in terms of number of species include Hibiscus (300 species), Sterculia (250 species), Dombeya (250 species), Pavonia (200 species) and Sida (200 species).2)https://en.wikipedia.org/wiki/Malvaceae#cite_note-3

From Susun Weed on The Wise Woman Herbal Ezine:
The mallow family contains nearly 200 genera (a genus is a group of closely related plants within a family, and genera is plural of genus). These include Alcea, Althea, Malva, Hoheria, Hibiscus, and Gossypium, along with more than 2000 species (specific plants within each genus).

The mallow family includes beautiful, edible, medicinal, and useful plants such as:

Virtually all parts of the mallows have been eaten or used as medicine including the fresh leaves, dried leaves, fresh roots, dried roots, flowers and both the green and ripe seeds.3)https://www.susunweed.com/herbal_ezine/November07/wisewoman.htm
~Susun Weed, herbalist, author-The Wise Woman Way

Most plants in the mallow family are known to contain the similar edible and medicinal properties. However, the marsh mallow—Althea officinalis—has far more of the mucilaginous properties than its relative malvaceaes. The one root to avoid is the cotton root for its abortive properties.4)https://www.susunweed.com/herbal_ezine/November07/wisewoman.htm 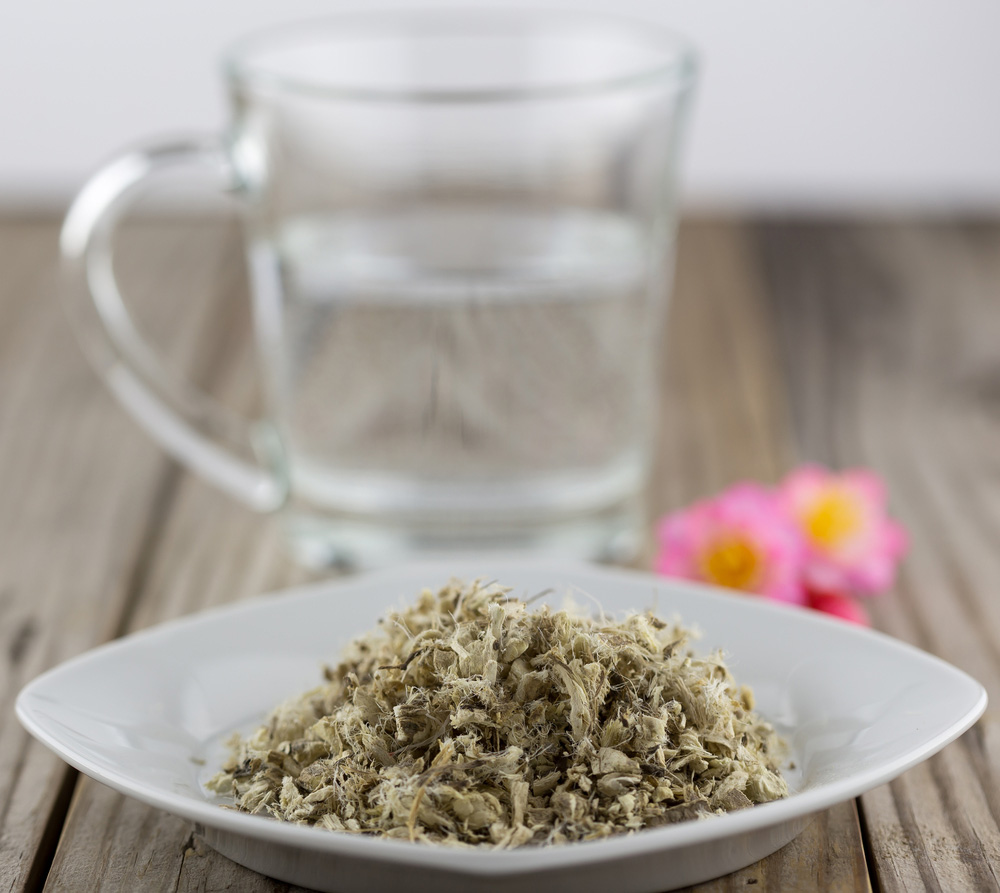 If you’ve ever cooked okra, then you’ll understand the mucilage component. Mucilaginous simply means having a thick, sticky or gelatinous consistency.

Most mallows are completely edible with medicinal properties. Some are more mucilaginous than others, such as the marsh mallow and rose mallow. These unpretentiously prolific “wasteland” plants have many uses and benefits.

CAUTION: Always check with a professional field guide for proper identification before using any plant as food or medicine. This information should not be construed or used as any kind of health, medical or nutrition advice. 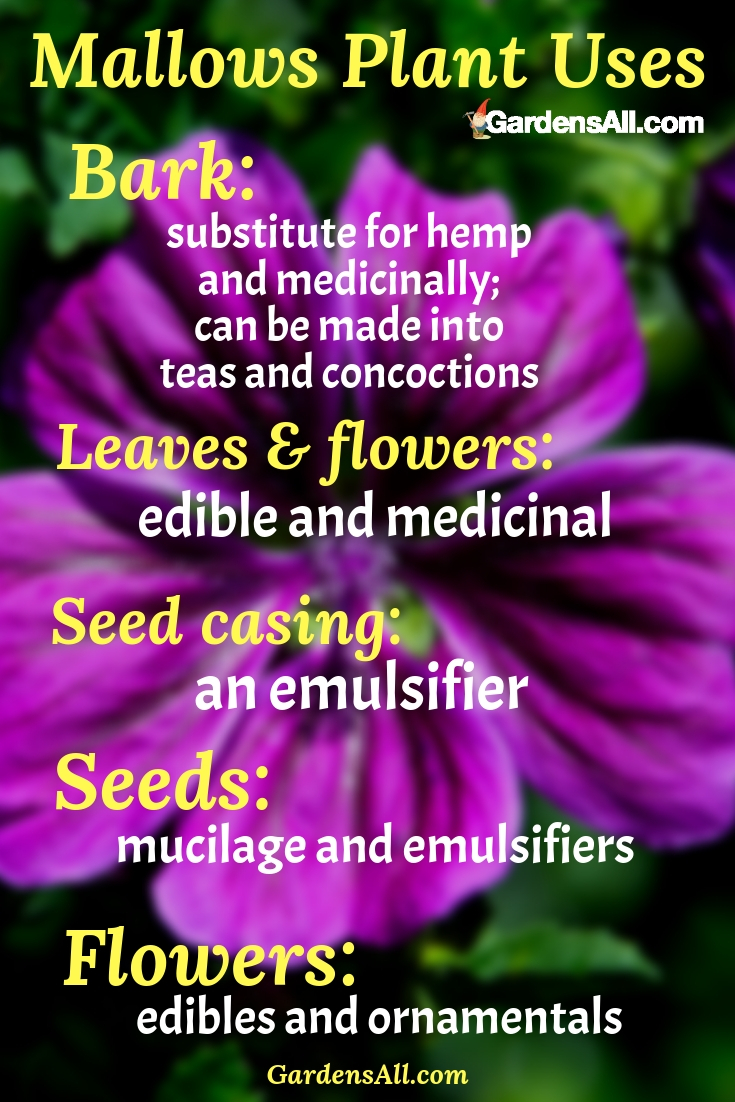 The seeds are often called “cheeses” and the plant, “cheeseweed” for the wedged rounded seed pods that look similar to a wheel of cheese. 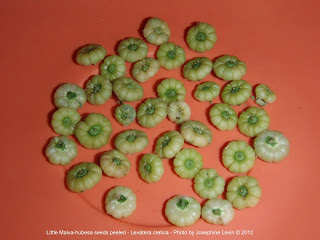 Here’s a summary of common uses for althea officinalis:

So, enjoy some tea from roots, leaves and flowers of mallow plants and include them in your raw and cooked foods on a regular basis for a steady dose of prevention.

10 Minutes to Better for Sore Throats

Disclaimer: Naturally, neither this article, author, website or any related party is responsible for any ill experience from any content. We seek to do research and share as much valid informations as we can find however, this cannot be construed as medical advice and you should always use your own discernment and the advice of your qualified medical advisors in any treatment or ailment.

Similar to dandelions and plantain, mallows are known to be one of the weeds brought to the Americas and much of the world by early European settlers.  A prolific grower, even in poor unattended soils, malvas were historically used as a survival food in times of famine.8)https://www.superfoods-for-superhealth.com/mallow-plant-nutrition.html

If you were heading out to conquer a new land (or a new homestead!), it makes sense to bring an ample supply of hardy plants.

Many of today’s weeds are nutritious and medicinal with a deep taproot perfectly suited to survive drought conditions. Our ancestors used these hardy nutrient dense survival plants such as dandelions, plantains and mallows as staple foods.

Malvaceae plants such as the marshmallow plant, (althea officinalis) are tenacious survivors, historically known as survival foods because they grow prolifically even in poor soils.

It’s astonishing really to consider how far we’ve come from our roots of recognizing these plants as edible. But it’s equally gratifying to see them making a comeback.

We wouldn’t dig up or poison spinach or lettuce to get rid of it. Yet today, these traditionally staple food sources are treated as menaces to kill rather than plants to eat. To view these plants as weeds instead of food is just a lack of familiarity and education.

How did it come about that we dispose of so many nutritionally and medicinally valuable foods? Might that be part of the puzzle of our national health crisis? Perhaps it began with lawns.

Now sure… lawns look lovely and nothing feels as wonderful as fresh grass under bare feet in summer. But… to kill weeds with vital nutrients seems like such a waste. If more people knew the health and food benefit, perhaps they would choose food over fashion.

Let’s not toss out the greens in order to have the grass. Instead toss the greens into the salad, sautees´ or soups! Edible weeds to keep and eat include:

Which Parts of the Mallow Plant are Edible?

All parts of the mallow plant are edible.

Mallow leaves have a mild flavor and can be eaten raw, added to a salad, steamed or dried for tea.  When cooked, the leaves create a mucus very similar to okra and can be used as a thickener to soups and stews.

The older leaves are great for adding to green smoothies or soups. The tender young mallow leaves are perfect eaten raw in salads, lightly steamed, or sauteed with butter and garlic or in stir fry. The flowers can also be harvested and consumed in the summer in salads and stir fry.

Common mallow leaves are rich in vitamins A and C as well as calcium, magnesium, potassium, iron and selenium.9)https://www.ediblewildfood.com/mallow.aspx

Boiling marsh mallow seeds releases mucilaginous properties needed for making marshmallows and medicines. Mucilaginous foods are needed as thickeners and emulsifiers. We haven’t tried it yet, but mallow should also work in place of cornstarch or arrowroot for gravies.

Mallow roots release a thick mucus when boiled in water. The viscous liquid that is created can be beaten to make a meringue-like substitute for egg whites.

The real magic of the mallow plant, however, comes from its beneficial polysaccharide and antioxidant compounds. Marsh mallow contains phenols, flavonoids, carotenoids, tocopherols and ALA fatty acids, all of which are beneficial for gastrointestinal and anti-inflammatory issues.10)https://www.superfoods-for-superhealth.com/mallow-plant-nutrition.html

“Non-essential” amino acids are aminos that the human body manufactures on its own. So even if you don’t consume foods with asparagine, your body will create its own.

However, consuming additional amino acids helps fortify and protect the body from stress and disease. So additional supplies of these non-essentials can help with performance and health.

Regular marshmallows contain gelatin, a protein made from boiling the skin, tendons, ligaments, and/or bones of (usually) cows and pigs in water. So this is a vegetarian version.

* Gum Tragacanth is a natural gum obtained from the dried sap of several species of Middle Eastern legumes.
**Gum Arabic is a natural, plant-based product from the acacia plant. 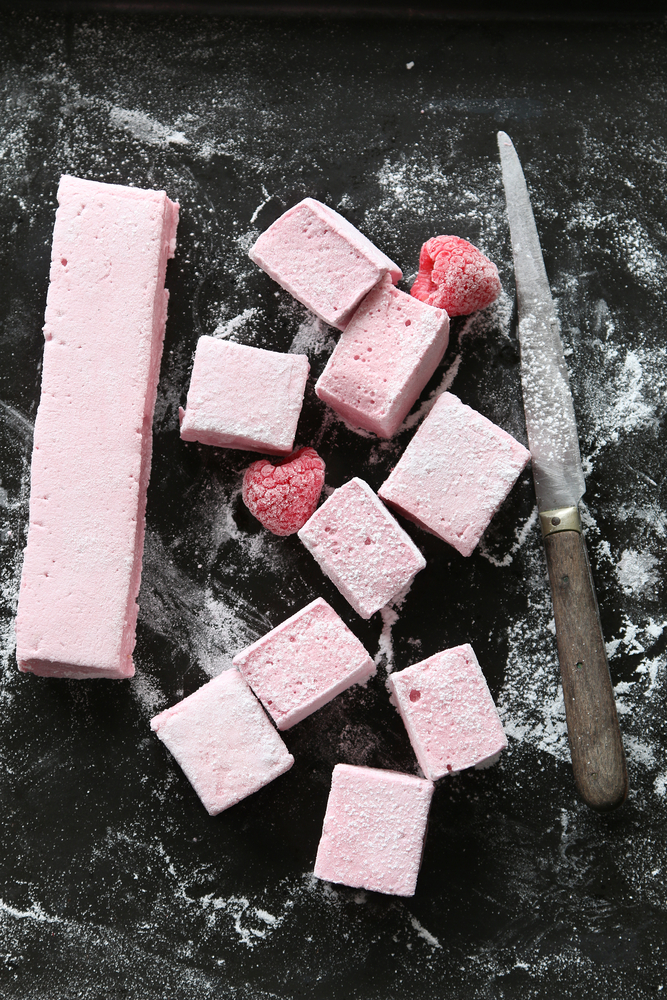 Mallow plants such as Marsh Mallow and Common Mallow can be found on most of the North American Continent and beyond. Mallow is a wonderful wild plant with numerous edible and medicinal benefits from the entire plant.

This approach is the shortcut to marshmallow making using regular gelatin. However, you could still use this tutorial and recipe for the mallow gelatin instead.

Please let us know what you think about the mallow and whether you make (or have already made) any homemade marshmallows. You can send us an email or join the conversations on the GardensAll Facebook page.

Disclaimer: This content is not medical advice. Always use your own discernment and the advice of your qualified medical advisors and experts in any treatment or ailment. 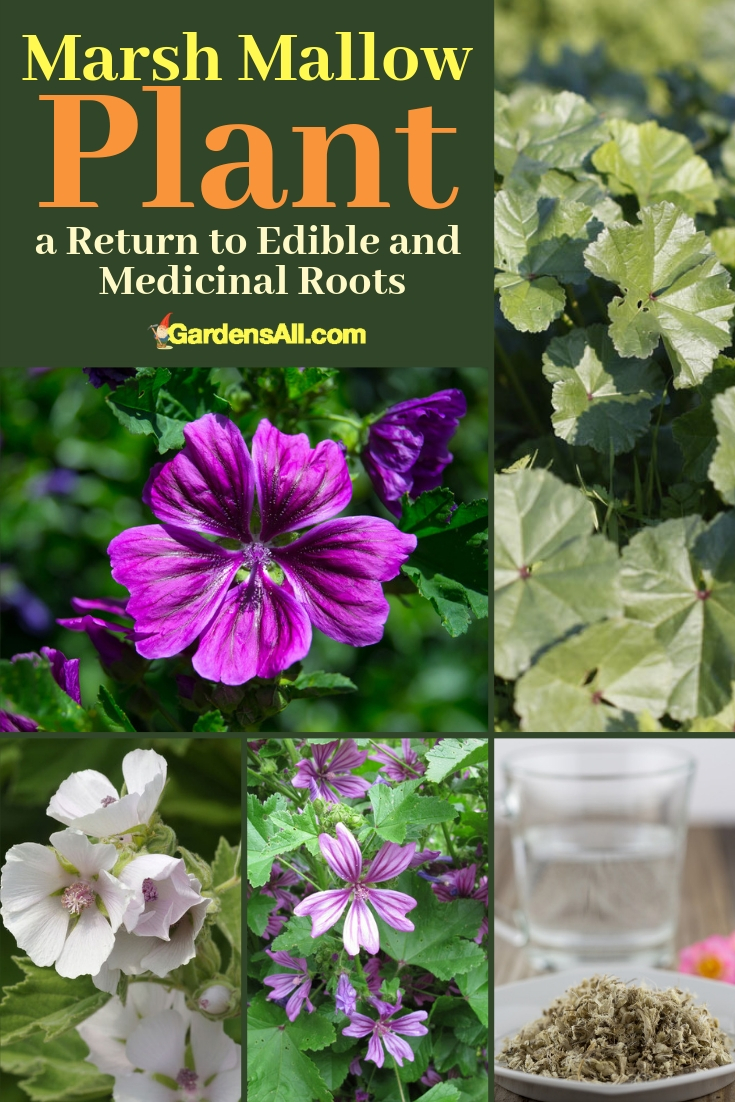 I’m LeAura Alderson, entrepreneur, ideator, media publisher, writer and editor of GardensAll.com. Pursuits in recent years have been more planting seeds of ideas for business growth more than gardening. However, I’ve always been interested in medicinal herbs and getting nutrition and healing from food over pharmacy. As a family we’re eager to dig more deeply into gardening and edible landscape for the love of fresh organic foods and self sustainability. We thoroughly enjoy and appreciate the creative ingenuity of the GardensAll community.

Scroll back to top