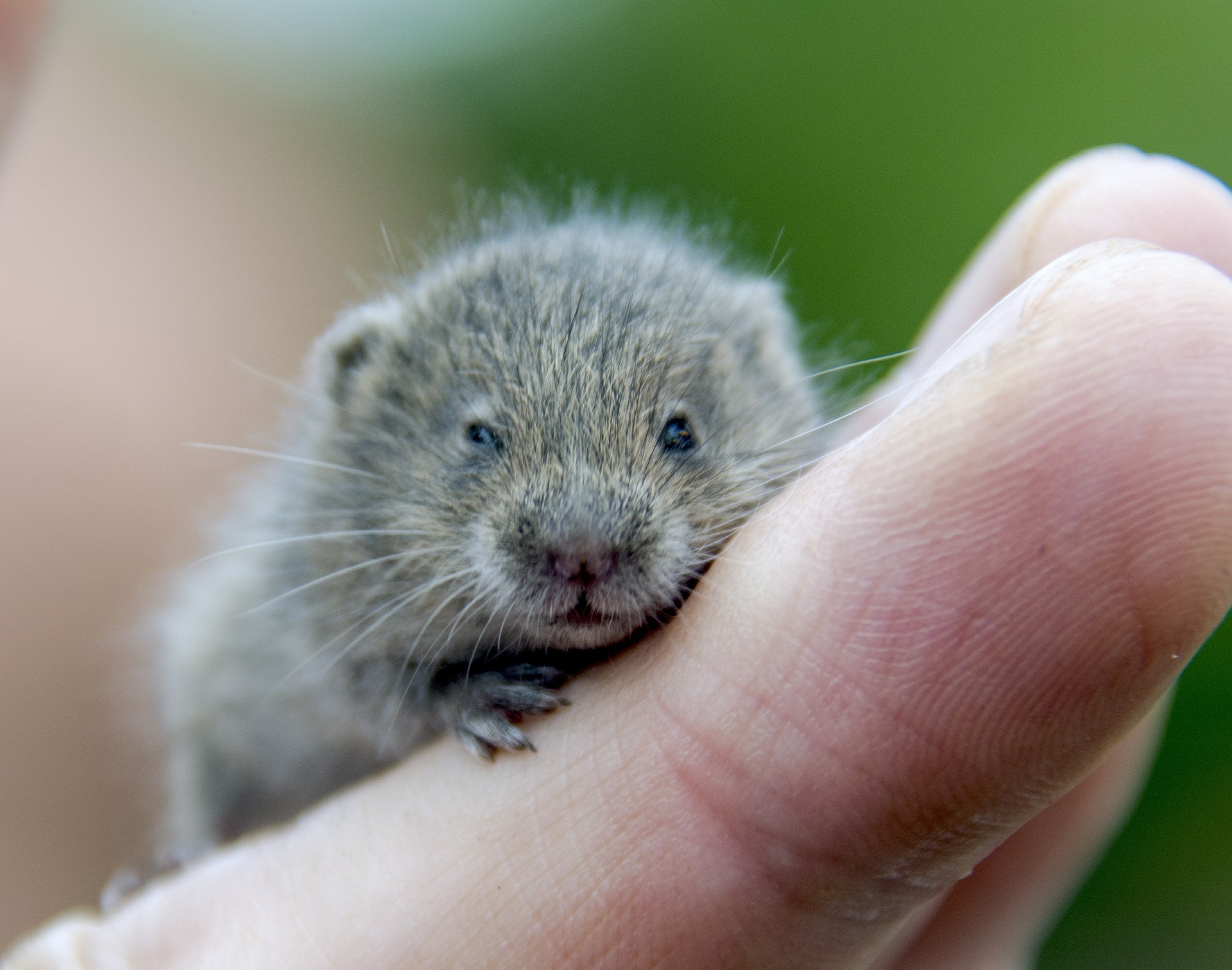 If you’ve ever lost your precious garden plants, veggies or fruits to burrowing critters, then you’ll want to know how to get rid of voles and moles. Chances are if you’re here reading this article it’s because you know the pain of that loss.

We lost many plants to moles last year, and something is already destroying plants this season.

We were harvesting some dandelion leaves for one of our favorite salads, from our hugelkultur bed and noticed some of the plants were wilted. I went to snap a leaf off and the whole plant came up out of the ground.

That’s when I noticed the telltale furrows in the soil… those raised ridges branching out like veins on top of the garden bed. Uh-oh! Voles or moles! Darn! It’s mid spring and the garden’s just getting started and those critters are already wreaking havoc on our plants!! Turns out they can even cause damage to plants under snow cover in winter. Yikes! Makes you wonder how our pioneer ancestors survived. They couldn’t just run to the local home store for traps, poisons and other deterrents.

If you’re wondering the difference between moles and voles, hop on over to our article on moles first. There we show and tell the differences so you can be sure you’ve identified the right garden pest, so you’ll be able to determine the best plan of attack. There’s also a descriptive image below.[1]https://www.gardensall.com/how-to-get-rid-moles/

We don’t have critter problems in our straw bale garden beds. You can read more about those here.

Here, we turn our attention from moles to voles.

VOLES: Habitat and Appearance – What does a Vole Look Like?

Size, feet, and face, fur coverage and tail, all distinguish these rodents from their subterranean insectivore counterparts, moles.

Voles are rodents. Moles are insectivores.

Voles are actually kind of cute. At least, a bit more cuddly looking than moles. Yet, these herbivores can wreak havoc on a garden in short order. They also feed on the roots and bark of woody plants, including those in nurseries and orchards where they can inflict a lot of damage in short order.

These cute little herbivores can wreak havoc on your garden.

Voles live in thatch and brush cover in grassy fields, shallow tunnels, and surface runways. They also can thrive under long term snow cover, a significant factor in relation to root and stem damage.

The species differ but not so much in how to control them.

Here is a GREAT illustration by Adelaide Tyrol that we found on NorthernWoodlands.org, that shows the differences between deer mouse, meadow vole, mole and shrew.

What Do Voles Eat?

Voles consume mostly vegetative matter though they will devour small creatures and occasionally scavenge. They go for grains, roots, and tender bark which leads to us discovering dead plants overnight, and all to often, dead shrubs and trees that fail to flourish with new growth in the spring.

Unlike the solitary seeking moles, these little fur balls are quite gregarious, short-lived (average life expectancy in the wild of just 2 months), and prolific in breeding 5-10 litters per year with 3-4 young per litter, so an average of 26 new voles per female per year. However, they’re also dying off.

Not sure the math on that but the bottom line is that there could be a perpetual population of voles at any time, happily chomping on the roots and bark of your plants and trees! And they can decimate crops in short order.[2]https://extensionpublications.unl.edu/assets/pdf/g887.pdf

Wintertime, when food sources are scarce, is the costliest period for vole damage. They will gnaw the roots below and the trunk’s green cambium layers of orchard trees and other woody plants.[3]https://extensionpublications.unl.edu/assets/pdf/g887.pdf

Plants, that are not killed directly often succumb to opportunistic diseases and pests that finish the job the voles started. Here in North Carolina our extension agents estimate that voles have inflicted moderate to severe damage to around 90 percent of the state’s home landscapes and gardens.

It’s been estimated that voles cause just apple growers close to $50,000,000 a year.[5]https://rodrepel.com/blog/blog/woodland-voles-causing-damage/ They also do substantial damage to soy, corn, and potato crops, particularly those in no-till cultivation.[6]https://extension.missouri.edu/p/G9445

In our survey of the non-commercial literature, the approach that makes the most sense to us is Integrated Pest Management or IPM. In so doing, there’s no relying on a single method that may or may not yield results as desired.

The first thing is to determine if voles are about the property in question. The “Apple Sign Test” has been recommended by our NC State University as the first step. It involves setting up test sites by placing a single roof shingle on the ground and putting a morsel of food underneath it and waiting 24 hours to check it. The result is noted on a map where you’ve already marked each test site’s location.  (For more details refer to the footnoted reference).1

At the end of the Apple Sign Test you should know if there’s a vole presence and if so, where they are generally located. The test should be conducted every fall and spring and records kept of the locations and subsequent control treatments.1

There are numerous ways to control vole damage and get rid of voles. Here are the four most relevant methods: Exclusion, Habitat Modification, Frightening, and Repelling.

The best and easiest way to control voles is to control their habitat. It’s hard to spend the time and money creating barriers before you have any problems, yet that’s the very best time to do it. If you can deter the critters before they set up house reproducing, life will be easier. Rodent control barriers are like insurance: a hassle to have to do but the best thing when you need it. So barriers are the best long term effective prevention strategy.

One exclusion method for vulnerable trees is to encircle the trunk with a wire cylinder 18 – 24 inches tall. The wire cage should be buried 4-6 inches below ground level. Obviously this works best for young saplings. Allow enough diameter for 5 years growth expansion.[8]https://extension.psu.edu/voles

Mowing ground covers to a maintained height of 3-6 inches, creating vegetative-free zones a minimum of 2 feet from the tree’s trunk, and removing organic materials such as mulch from around the trunk and replacing it with 3-4 inches of crushed stone or gravel will help.

Vole Repellents for Frightening and Repelling

Repellents containing capsaicin (the hot component in peppers) and thiram (fungicide) may help, however, these can be expensive and there’s no proven effectiveness yet. They may make a plant taste bad but are temporary at best since the voles may adapt to the taste or not be affected at all.

These could get expensive, because that’s a lot of plants to cover plus you’ll need to reapply periodically and especially after rain.

We love animals and try to use natural, non-lethal remedies whenever possible. But when it comes to the food for your family or your business livelihood, such as with an orchard business, you might have to take more strenuous measures such as mouse traps or vole poison.

You can trap voles by placing traps baited with apple or peanut butter around the vole pathways. You’ll need to anchor them so that the vole doesn’t drag the trap away from that location.

Just remember that all rodenticides are designed to kill mammals, so if you can’t keep your pets away you’ll have to find another method.

You can find rodenticides at your local homestore or on Amazon. The upside is that these can work. The negatives…?

For more on voles and moles, you can read this article. For more details on the vole problem, visit this article on Missouri.edu and this extensive article on Penn State’s ag site.

Wisdom from the Crowd

Jacob Kolberg-Lunak says:
Solar sensors that make noise or vibration in the earth work really well. Something like this. Many different brands but a very effective non harmful way that works.

They usually come in packs of 2. I have a bunch scattered throughout our yard. They work VERY well and are harm free. Moles, voles and rats don’t like the frequency it makes. I recommend using them around garden and maybe a few other places in the yard just as precautions. Best of luck.

G. Coleman Alderson is an entrepreneur, land manager, investor, gardener, and author of the novel, Mountain Whispers: Days Without Sun. Coleman holds an MS from Penn State where his thesis centered on horticulture, park planning, design, and maintenance. He’s a member of the Phi Kappa Phi Honor Society and a licensed building contractor for 27 years. “But nothing surpasses my 40 years of lessons from the field and garden. And in the garden, as in life, it’s always interesting because those lessons never end!” Coleman Alderson