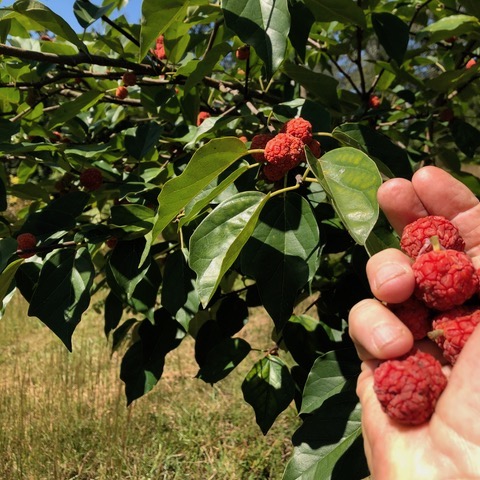 Che fruit, Cudrania tricuspidata, looks like a hard raspberry, with a taste and texture most closely resembling fresh figs.

Reminiscent of its relative, the mulberry, che has a similar persistent stem at the end that you can hold while you nibble the fruit off. Che has thicker, bumpy outer skin that’s edible, giving way to a juicy, soft interior, the same pale red color of the outer fruit, and a squishy texture and taste resembling that of a fig.

We have the seedless che exclusive to EdibleLandscaping.com, from whom we also got our passionflower. The seeded varieties are said to have three to six small brown seeds per fruit.

Unlike blueberries, birds won’t bother your seedless che, according to EdibleLandscaping. That has also been our experience with our seedless che, however, California Rare Fruit Growers, CRFG, says that birds are attracted to the ripe che fruit.

Perhaps there’s a different allure to birds of the seeded che…? We’re not sure so either way, if you plant che keep an eye out for whether you’ll need bird deflectors once your che trees fruit.

Deer will ravage both leaves and fruit, especially the leaves of tender new plants. After we planted our second young che tree the deer promptly ate it to the ground. Fortunately, they haven’t touched our the fruit so far, perhaps due to the Milorganite fertilizer that’s also a deer deterrent.

Che Fruit trees, like mulberries, are hardy and easy to grow, requiring no spraying. Just keep the deer away.

What is a Che Fruit?

A che resembles a thick skinned raspberry that mated with a lychee. Che is a “collective fruit” or “multiple fruit”, fruit. Like the mulberry, che is not actually a berry at all.

Collective fruits are formed when multiple tiny clustered flowers each form a fruit that grows together. Thus the bumps you see on a che were each once individual flowers that became individual fruits that joined together to form one larger fruit as a collective.

The Flowers in the Fruit

Do you see the squiggly black lines or dots in the che fruits below? That’s actually the former flowers’ stigmas. So each bump was a former ovary in a single tiny flower that became a tiny fruit, that then merged into a cluster with other fruits.

Ches begin to bear at an early age and mature trees can produce as much as 400 pounds of fruit. The fruits ripen around November in California. Unlike mulberries, the ripe fruits do not separate easily from the tree and must be individually picked. It is important that the fruits be thoroughly ripe to be at their best. A darker shade of red with some blackening of the skin is a good indication of full ripeness

We use Milorganite to help deter deer, though unfortunately, we did not use it for our newly planted che before the deer devoured it.

TIP: Do not plant near sidewalk or driveway as fruit that drops will stain light concrete.

Let us know if you’re growing che. We’d love to hear how it’s going for you.

I’m LeAura Alderson, entrepreneur, ideator, media publisher, writer and editor of GardensAll.com. Pursuits in recent years have been more planting seeds of ideas for business growth more than gardening. However, I’ve always kept plants, been interested in medicinal herbs and nutrition and healing from food over pharmacy. I assist in our family gardening projects primarily (at present) through the sharing of information through our websites and newsletters.

As a family we’re steadily expanding our gardening, experimentation and knowledge around all things gardening, edible landscaping, fresh organic foods and self sustainability and hopefully, farming in our future. We thoroughly enjoy and appreciate the creative ingenuity of the GardensAll community. I also own and manage theiCreateDaily.com.